In this article we’ll visualize a number of scenarios which will show how backpressure and certain flow constructs provided by akka-streams influence the producer of events (the source) and how it affects the subscriber (the sink) to these events. To visualize this data we’ll use a set of simple traits I created for some experiments with monitoring akka actors (sources can be found here: http://github.com/jos.dirksen/akka-mon), together with statsd, influxdb and grafana. For those of you now familiar with these technologies a quick explanation:

<li statsd (https://github.com/etsy/statsd): Statsd is a simple event collector. It will collect events from any source, aggregate them, and every 30 seconds output a summary of what was collected.</li>

So basically with these components installed and configured we have the following flow:

As you can see there are a number of moving parts that need to be installed or configured to get all this working correctly. If you want to try this for yourself, I’ve added all the configuration files and the source code of the scenarios to github here (https://github.com/josdirksen/akka-back-pressure).

I’m not going to explain all the configuration files and installation instructions of the various tools that are used. The default installations of influxdb, statsd and grafana should suffice, and the relevant configurations files can be found

In this method we use a flow graph to create a new source, which we can use in out other flows. This source combines two existing sources to create a new one. We use a simple source created from a range to produce a number of messages and we use a tick source to throttle the amount of messages that should be send per second. This works in the following manner:

Since this graph is a source we need to return an unconnected outlet. In this case we return sendMap.outlet and now we have a source whose message rate can be easily controlled.

In this scenario we connect the source (which we showed above) to an actor sink. An actor sink is an standard Akka actor which, in our case, requests events/messages as fast as they become available. In this example we use an Actor where we can configure a delay to simulate slow subscribers. This Actor looks like this:

To work with akka-streams this actor must extend the ActorSubscriber trait and define a requeststrategy (see documentation (link) for more information on this). As you can see this is a very simple actor, which just processes the message and waits for the specified delay. Note that the other traits are just monitoring traits which send metrics to statsd.

Now, lets see what happens when we run this example (if you do this yourself, make sure statsd and influxdb are also running). With the results in influxdb, we can use grafana to create a graph which shows the number of messages created by the source and processed by the subscriber. 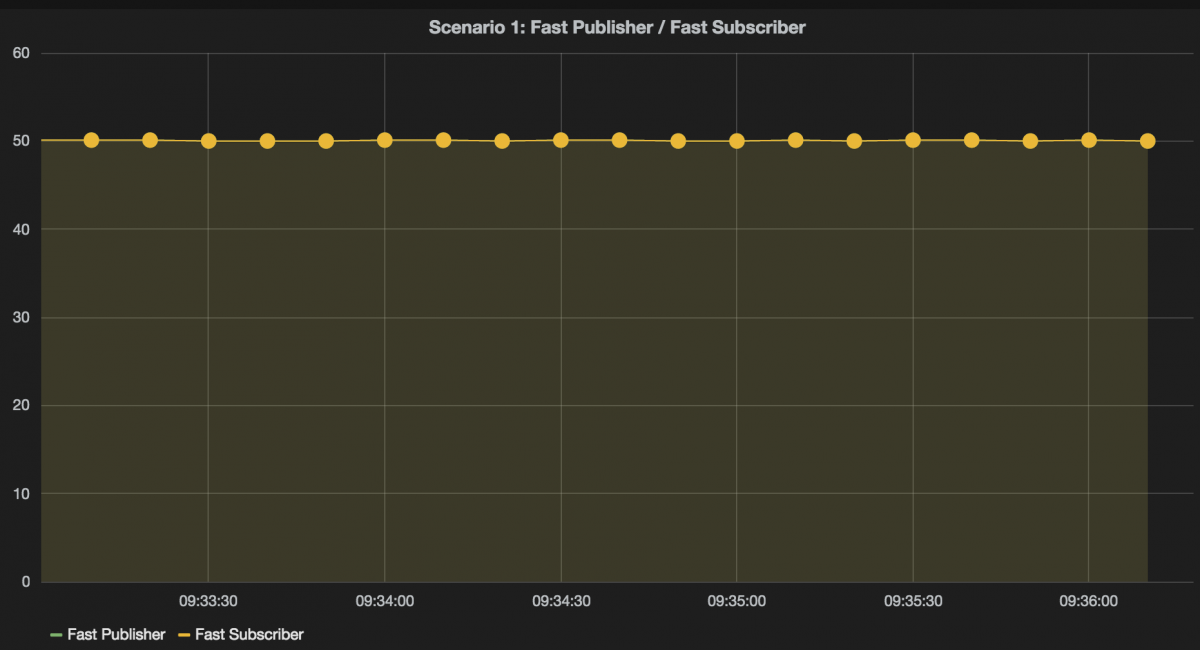 As you can see, no suprises there. The rate of the subscriber is exactly equal to the rate of the publisher and hovers around the 30 messages per second.

So in the next scenario lets look and see how back pressure can affect the rate of our publisher. If you’ve viewed the presentation at the beginning of this article, you know that with back pressure a slow consumer can limit the rate a publisher sends event and vice versa. So in this scenario we’ll simulate a consumer which gets slower after each message it has processed:

For this scenario we use a different actor, the SlowDownActor. This actor will run slower each time it has processed a message:

In the receive message of this actor we do a Thread.sleep with an increasing delay. In this scenario, since we use backpressure, the rate of the publisher is controlled by the speed at which the subscriber can process messages. This can be seen in the resulting grafana graph:

In this scenario we introduce a specific buidling block provided by akka-streams, the buffer. If an upstream subscriber is to slow, the buffer will store a specific number of messages before either telling the publisher to slow down, or it will start dropping messages. We’ll use the following scenario:

We start producing 5000 messages at a rate of 50 per second. These messages get buffered in the buffer and finally consumed by the ‘slowingSink’, which is a SlowDownActor (see code above). We’ve configured the buffer with a size of 100 and an OverFlowStrategy of dropHead, which means we’ll drop the oldest message in the buffer when new ones arrive. When we run this scenario you’ll see the following:

This results in the following grafana graph: 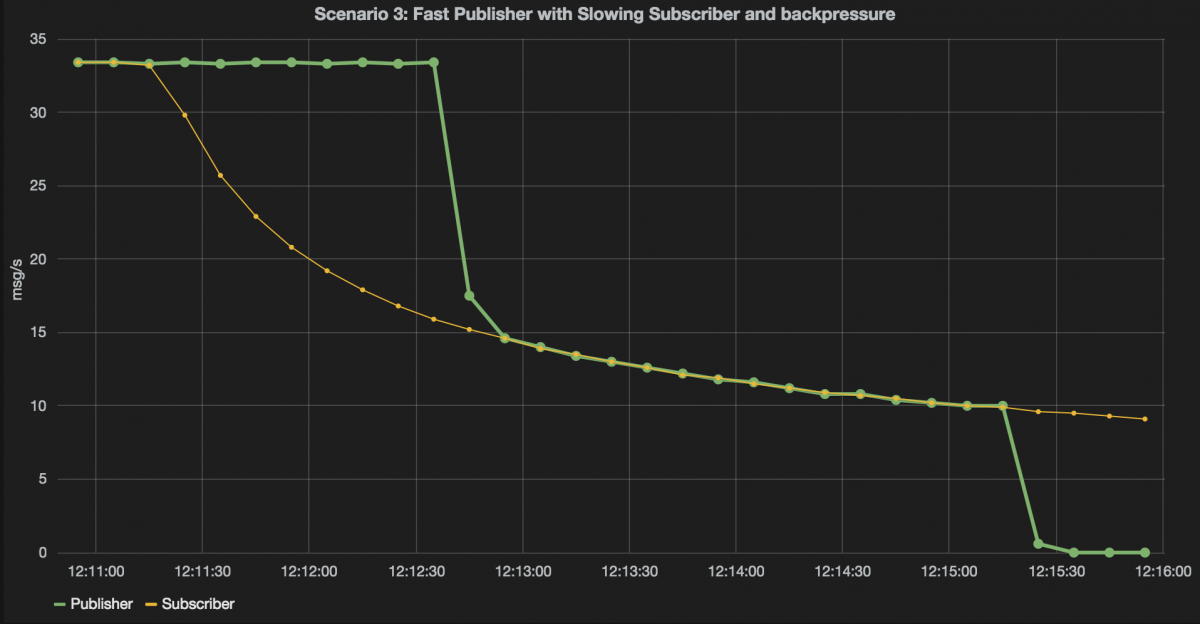 Fourth scenario: Fast publisher, one fast consumers, one consumer which gets slower

So far we’ve only seen 1 publisher and 1 consumer, in this scenario we’ll look at the effect of two subscribers on the same publisher:

For this we use the Broadcast construct. With a broadcast we duplicate the message and send it to multiple subscribers. In this scenario we have one slow subscriber and one fast subscriber. The result of this can be seen in the following graph:

Fifth scenario: Fast publisher, one fast consumers and one slow consumer which gets slower but has buffer with drop

Compare this graph to the previous one we saw. Here we see that the rate of the publisher and the fast subscriber stays at the same rate. The reason is that the messages are dropped by the buffer we added before the slow subscriber.

When we change the buffer to stop dropping messages, and use backpressure instead we get the following:

Akka-streams offers a number of other graph components you can use to define a message flow. One interesting one to look at, and also the last one, is the balancer.

Sixth scenario: Fast publisher, fast subscriber and a slowing down subscriber together with a balancer

This results in the following graph:

So what can we conclude from all this? What you can see is that with reactive-streams and backpressure it is really simple to make sure that the rate of a publisher and subscriber are nicely aligned. This allows for great control of the flow, avoids memory overflows, and with the additional flow constructs it is really easy to support more advanced scenarios.

There is much more to learn about reactive-streams, akka-streams and all the various ways you can use this. What really helped me a lot understanding this, is by looking at the graphs. I think they really nicely show how backpressure (and the other constructs) affect publisher and subscribers of event streams.