I’ve done a lot of Kotlin for the last two years, and have mainly followed Scala and done some pet projects. Since a lot of interesting stuff has been going on in the Scala space for the last couple of months, I want to start writing some more about it, and my experiences with it. So expect some articles on Scala 3 and ZIO. For the first of these set of articles, I’d like to focus a bit on ZIO. I’m exploring the documentation, watched some presentations, but nothing works as best, as just writing a simple application with it.

So in this first part on ZIO, I’m going to look at a simple layered ZIO application that (for now) consists out of the following:

If you want to play along, everything should work out of the box with Metals: 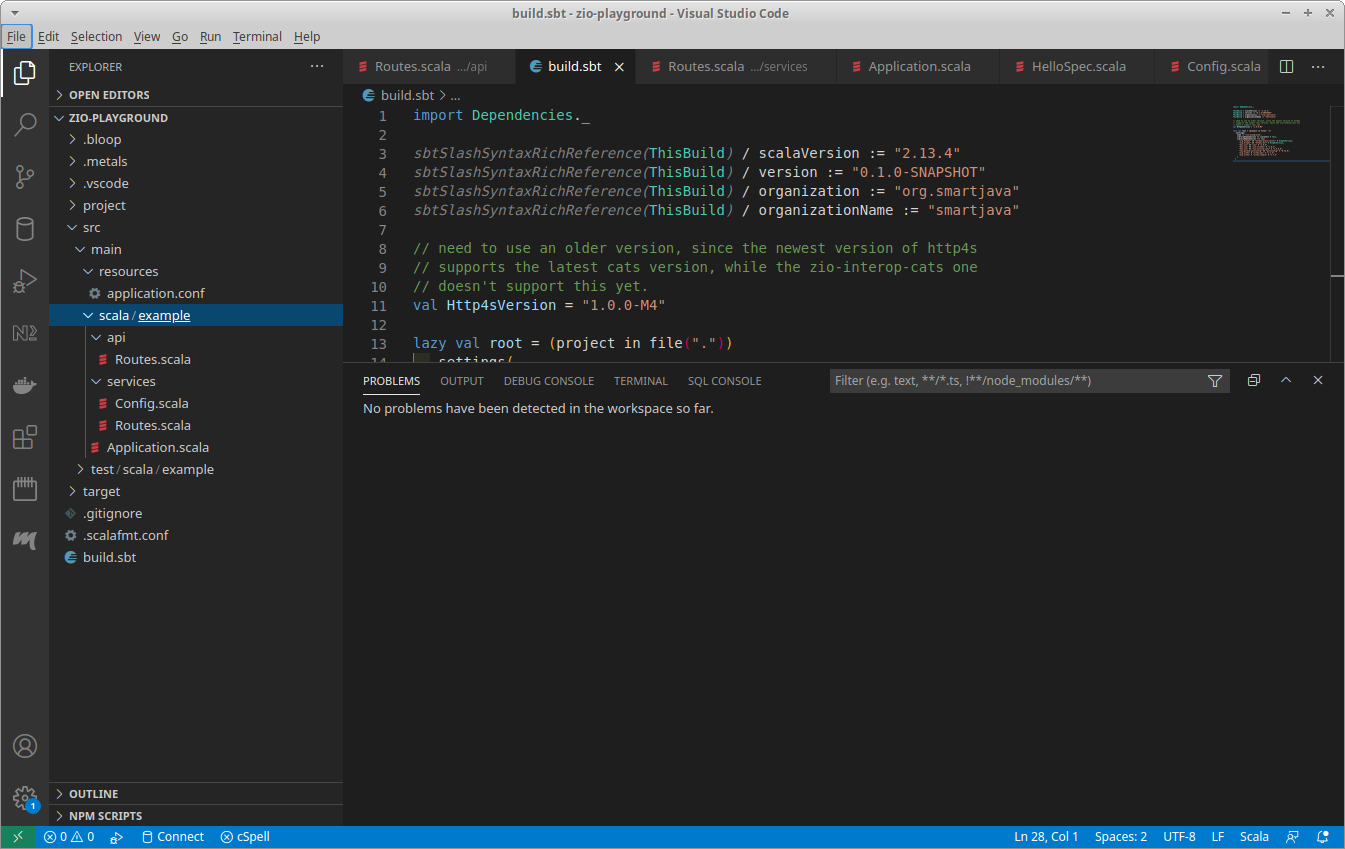 Before we can do anything, we need to define the dependencies (build.sbt). When I started playing around with this, there were some dependencies issues between the version of cats, the version of HTTP4S and the zio-cats-interop stuff, so after some checking, the following is a good starting point (I’ll have a look and update this to a newer version in the future).

Looking at the dependencies above, nothing out of the ordinary. Note the last two dependencies which we’ll use for testing part of the application.

To load this configuration we call ConfigSource.default.load[Config], this returns us with an Either where we have a list of configuration exceptions, or the loaded configuration. To wrap this in ZIO we need to lift it into a ZIO type. We’ll use the Task type from ZIO for this. A Task is one of the default type aliases:

So we’ve got an operation that can either fail with a Throwable or succeed with an A. To lift our Either we just call fromEither:

Since the load returns a list of ConfigReaderFailures, we just map the left part into an exception, before we can convert it into a ZIO Task. Now that we’ve got this configuration, we can use it in for-comprehensions, pass it to other components that need it and anything else you want to do with it. For this example we’re going one step further, and we’ll define the loading of the configuration as a service, which we can define as a dependency for other services. For ZIO the standard way of doing this is by using ZLayer. I found the documentation a bit hard to follow, but once you start playing around with it, it becomes a lot easier to understand. Below I’ve put the complete source for the configuration service, with inline comments explaining the various steps. Note that this structure is the proposed convention from ZIO, so it’s something you’ll see coming back in multiple sources.

The trait Has[A] is used with ZIO environment to express an effect’s dependency on a service of type A. For example, RIO[Has[Console.Service], Unit] is an effect that requires a Console.Service service. Inside the ZIO library, type aliases are provided as shorthands for common services, e.g.:

After the type definition, we define a trait with the specific functions provided by this service. In our case this is just the load function (we’d actually could do better by loading during service creation, and assign it to a lazy val or use memomize). The next step we need to do is define the different implementation we have of our service. We could have specific ones for testing, for specific environments and so on. In this case we have one, for which it is the convention to call that one live:

Here we load the configuration, and lift it into the Task. We create an anonymous instance, and return that as the result of the ZLayer.succeed function. ZLayer.succeed means that service creation of this instance will always succeed. In our case that is true, since we only load the config at the point it is needed. There are other ZLayer functions which allow you to create managed resources, or where the creation of the service returns an effect (e.g a Task). For now though, since nothing can go wrong here, we use ZLayer.succeed.

The final part of this service, is that we provide a convenience method called load, which mirrors the load function from our service:

This means that if there is a Configuration in the provided environment, we can use this helper function to directly access the load function, and load the configuration. We’ll show you how this is used further down in this article, when we start tying services together.

Running the above test will show something like this:

At this point we’ve got a simple configuration service, but we haven’t got an application yet. So before we move on the http4s stuff, we’re going to set up a minimal application.

Once again, I’ll show the annotated code, and then go into some of the details:

Here we extend from zio.App which gives us the override def run(args: List[String]): URIO[ZEnv, ExitCode] function to implement as entrypoint in the application. What we do in this entry point is call our program, and when we do that we provide a set of layers containing our services. In this example we just provide the layer we just defined, where we can load the configuration. In out program myAppLogic we load the configuration (which is present in the environment of our ZIO type.). The result is very simply that we see this:

What we did above is pretty much the same as we did in the test. We provide a program to execute, and when we execute that program we pass in a set of services that can be accessed through the environment.

For the last part of this article, we’ll also add a very simple HTTP4S server that will just return ok (we’ll look at the mapping to case classes later). For the HTTP4S server we want it to use the configuration layer we defined earlier. To get the HTTP4S server running we need to take a couple of extra steps to make it work correctly with ZIO.

If you look at this signature you can see that, besides an explicit executionContext we also need an implicit Timer[F] and implicit ConcurrentEffect[F], where F is the type we want to work with. Since we’re already working with a Task in the config service, lets do that as well for this part. So we want to use the builder like this: BlazeServerBuilder[Task](someExecutionContext).

This won’t work however, since we don’t have the correct implicits in scope, and don’t use the types from Cats. Luckily zio provides an interop library that provides us with the correct implicits. For instance the ConcurrentEffect[Task] and Timer[Task are provided by this implicit function from the CatsEffectInstances class:

Now that we now which dependencies we need we can create the service. First we’ll look at the basic structure, and then a bit closer at how to create the HTTP4s server:

The code above defines our server, and the signature for the live instance. As we mentioned we want to use information from the Configuration dependency to configure the service, and we need to have access to the zio runtime to correctly set up HTTP4s. ZIO has helper functions for creating the runtime, so lets look at the implementation of the live instance.

Before we look at the fromManaged, let’s first look at the way we create the server. As we mentioned we need access the runtime, ZIO provides a useful helper for this called ZManaged.runtime, where we create a runtime based on the passed in type. Using this runtime, we can create the BlazeServerBuilder. When using cats we would use the resource to safely start and stop the server. In ZIO world this is called a ZManaged:

The resource from the call to .resource can be converted to a ZManaged by calling toManagedZIO. Since this returns a ZManaged type, we also need to make sure that the other types in our for-comprehension are also ZManageds. So we use the toManaged_ function to convert the result from the Configuration.load to a ZManaged. At the end of the for-comprehension we can then convert the resulting ZManaged into a ZLayer by calling the fromManaged.

This seems like a lot of work, but it nicely shows how well ZIO can play with existing Cats types.

Defining a minimal API and running the application

Without going too much into detail on the http4s specifics, the following are the routes we support for now (don’t look at the implementation, since it’s just some placeholders for future implementation)

And with some small updates our main program looks like this:

We first combine the ZEnv.live and Configuration.live layers into a first layer using the ++ operator. Next we pass these dependencies to the http4sServer layer. The >>> operator uses the provided left hand operand as dependencies and returns the layer on the right hand side. This final layer is passed into the application using provideLayer. Our application is just a ZIO.never, which means that our application will keep running until interrupted.

So that’s it for now. We’ve only scratched the surface of ZIO, but this should at least give you a nice idea on how the layering and dependency management works. If I don’t get distracted by something else, I’ll try and post a couple of other articles about ZIO.