Recently video copilot released a free set of high-definition professional grade 3D models (which you can download for yourself from here). This model pack, which is over 400MB big) contains highly detailed model with a number of very high-quality textures. In this short article, I'll show you the workflow of converting these models into a format more easy to use in Three.js, and show you how you can render these in your browser. If your're impatient you can view the result here: http://www.smartjava.org/examples/threejs-starwars/src/html/

In this short article we'll take the following steps:

I'm using Blender for the conversion and some testing, but you can use other tools as well. An advantage, though, of using Blender together with Three.js, is that you can use the Three.js Blender plugin, to export models in a format easily readable by Three.js. In this case, however, we'll just use the obj format, which is also supported by three.js.

Once you've downloaded the models, extract them somewhere and startup Blender. Remove the standard cube in the middle and use file->Import 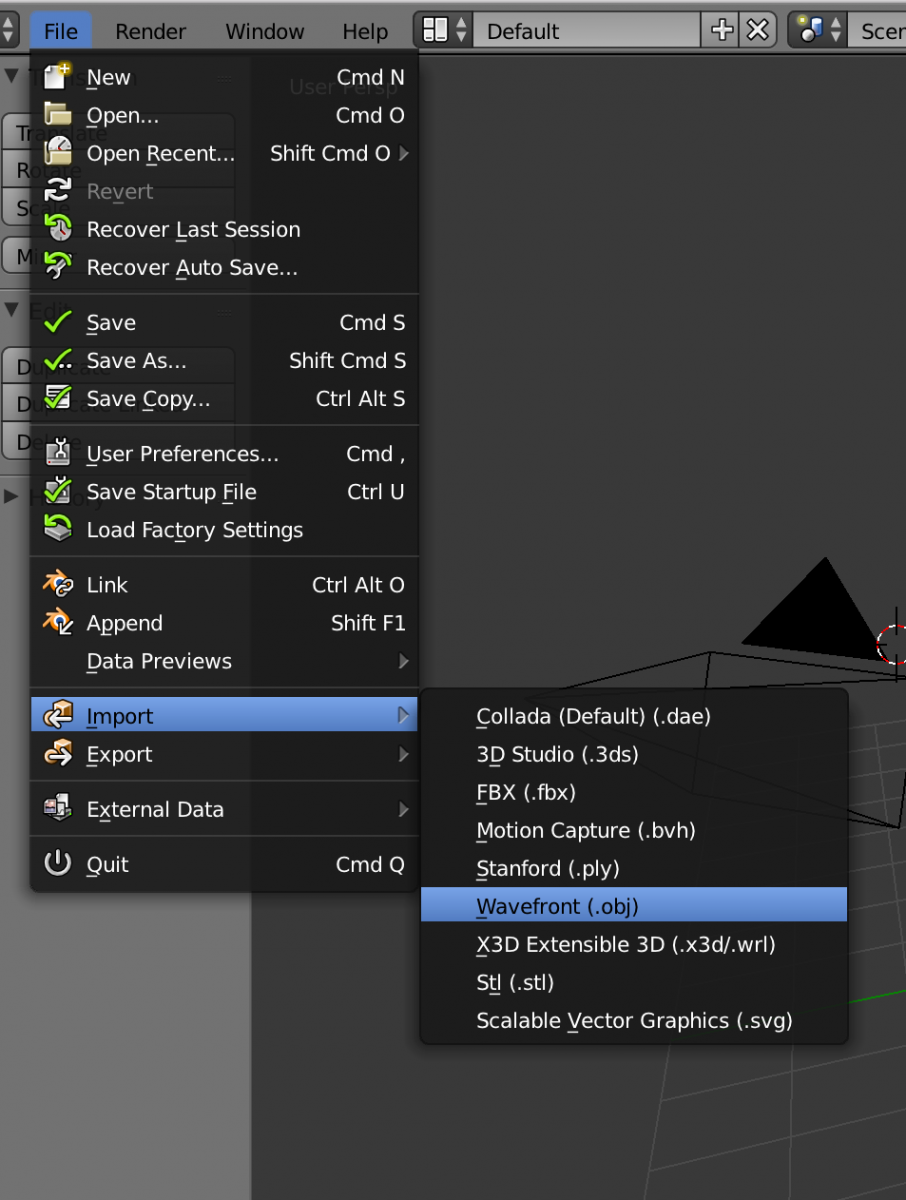 Navigate to the directory where you extraced the models and select the one you want to load. For this short tutorial, I've used the R2D2 model. After the model is loaded you might need to zoom ut a bit to see the real model: 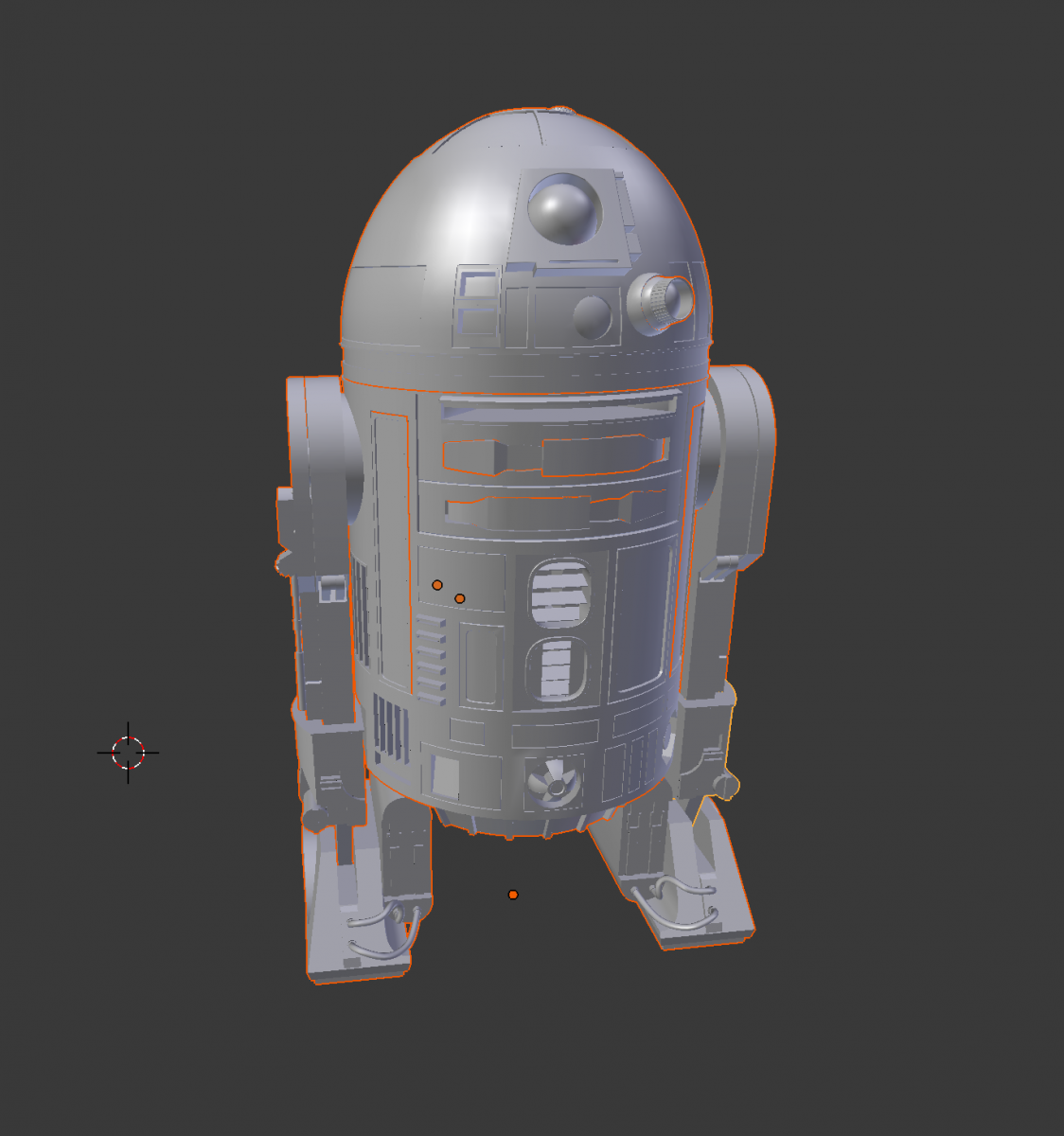 Already looks cool, right? It's a relatively low-poly model, which uses textures to create the renders. We however, need to take a couple of steps to 'fix' the model in Blender. When you import the model, and try to render it for the first time, or use material or texture viewport shading, you won't see a detailled R2D2 model, but just a gray one: 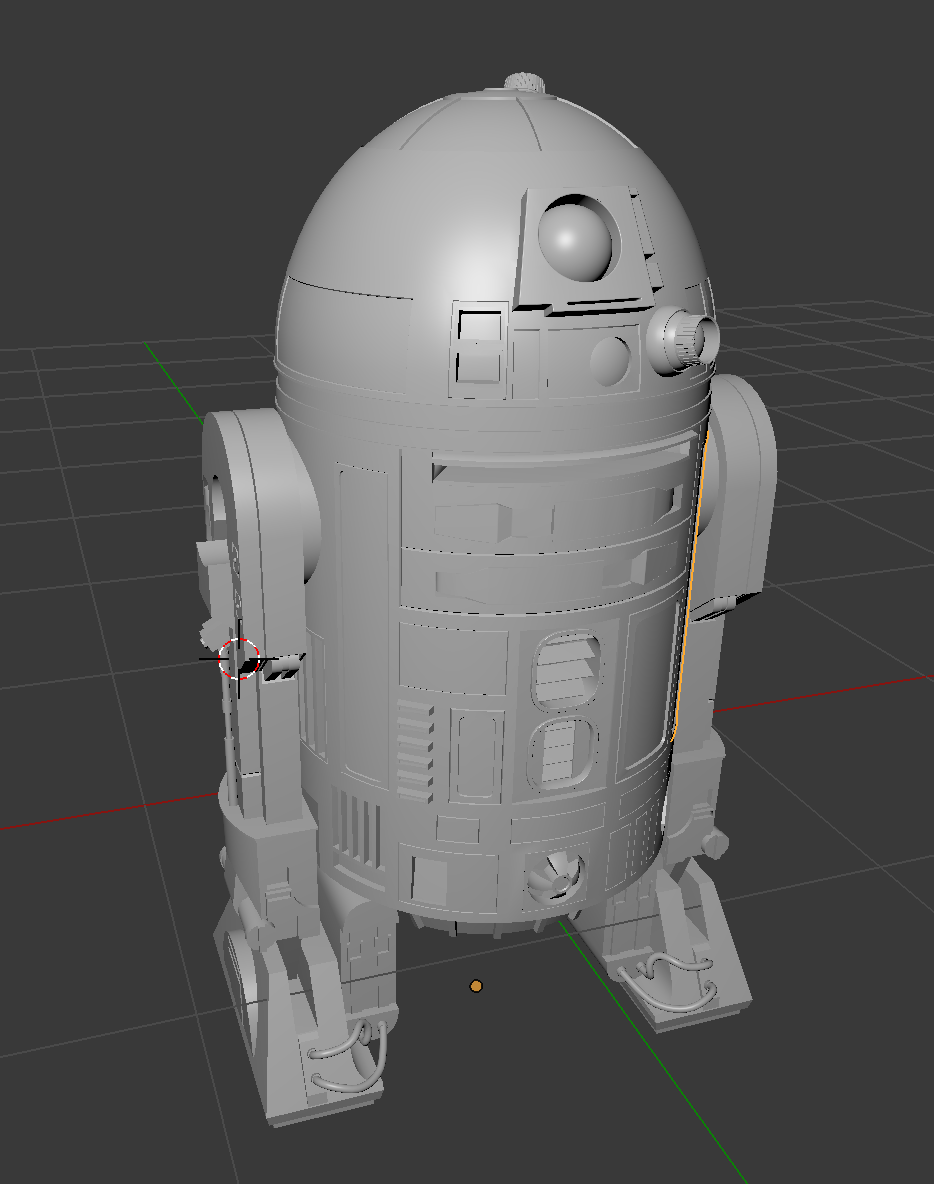 So, there seems to be something wrong with the materials. What the problem is, is that the image files aren't correctly mapped in the obj files (I assume they are in the Element 3D file format, but I don't have After Effects or Element 3D, so can't check). So we need to do some fixing. The advantage is that the UV mapping, luckily, is present for this model: 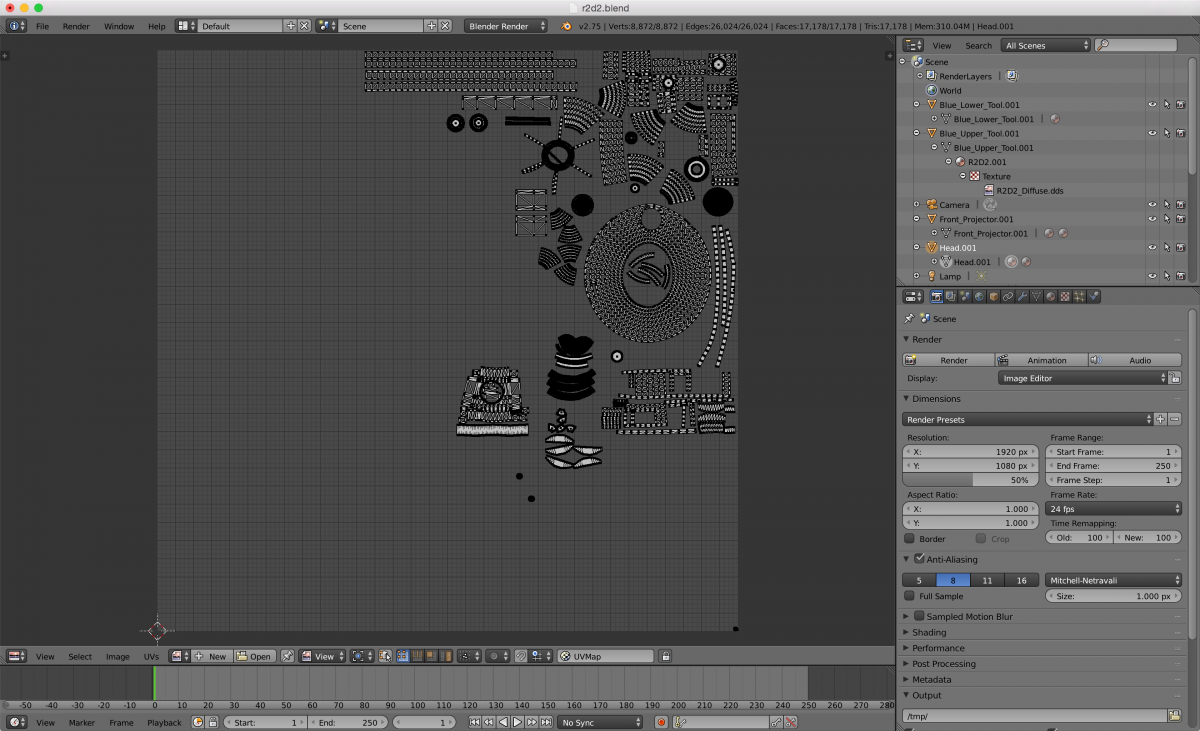 Now, we can just add the diffuse map, and we should see a correctly rendered model (also make sure you set the lights correctly, or else you'll get a completely black model). Select one of the components of the model (e.g the left foot), and in the material tab you'll see a texture named R2D2.001.

Select that one, and then select the texture tab. Create a new texture, here and assign the R2D2_Diffuse.dds from the Maps directory. This'll result in the following texture definition: 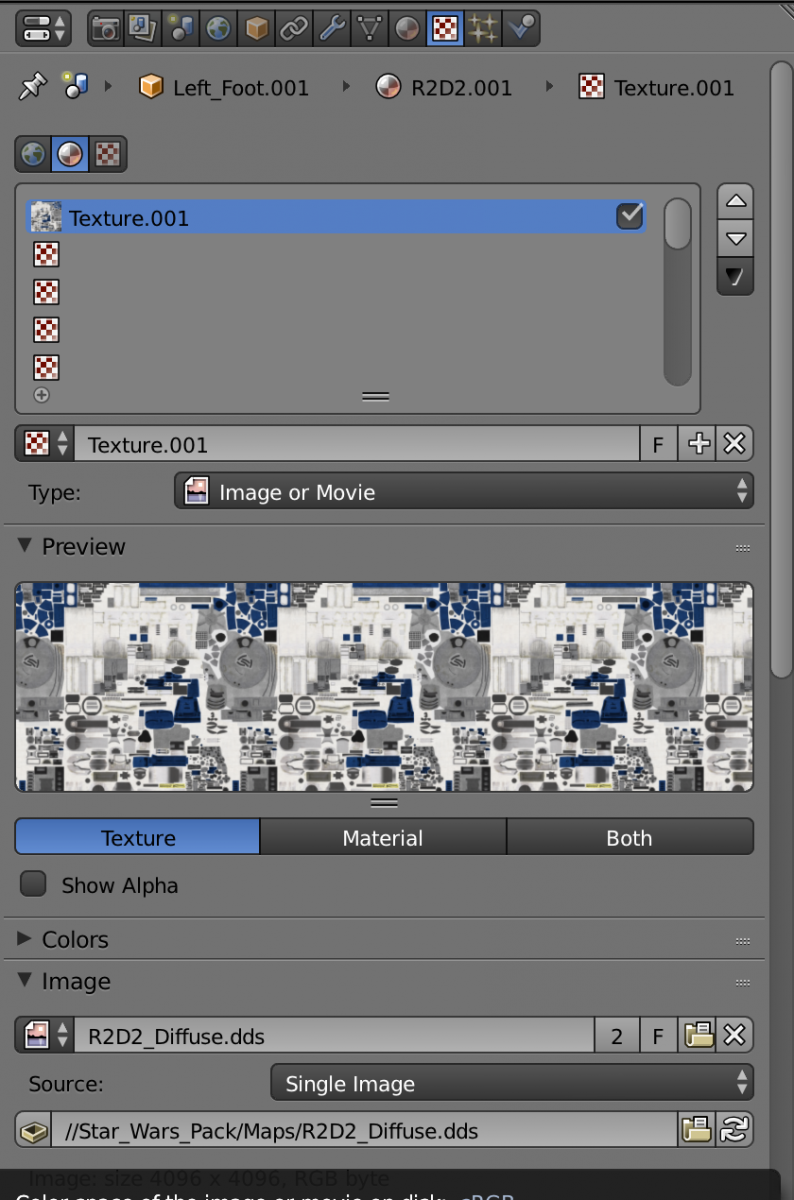 And if you now look at our R2D2 model, you'll see that we've got an already nicely rendered model. 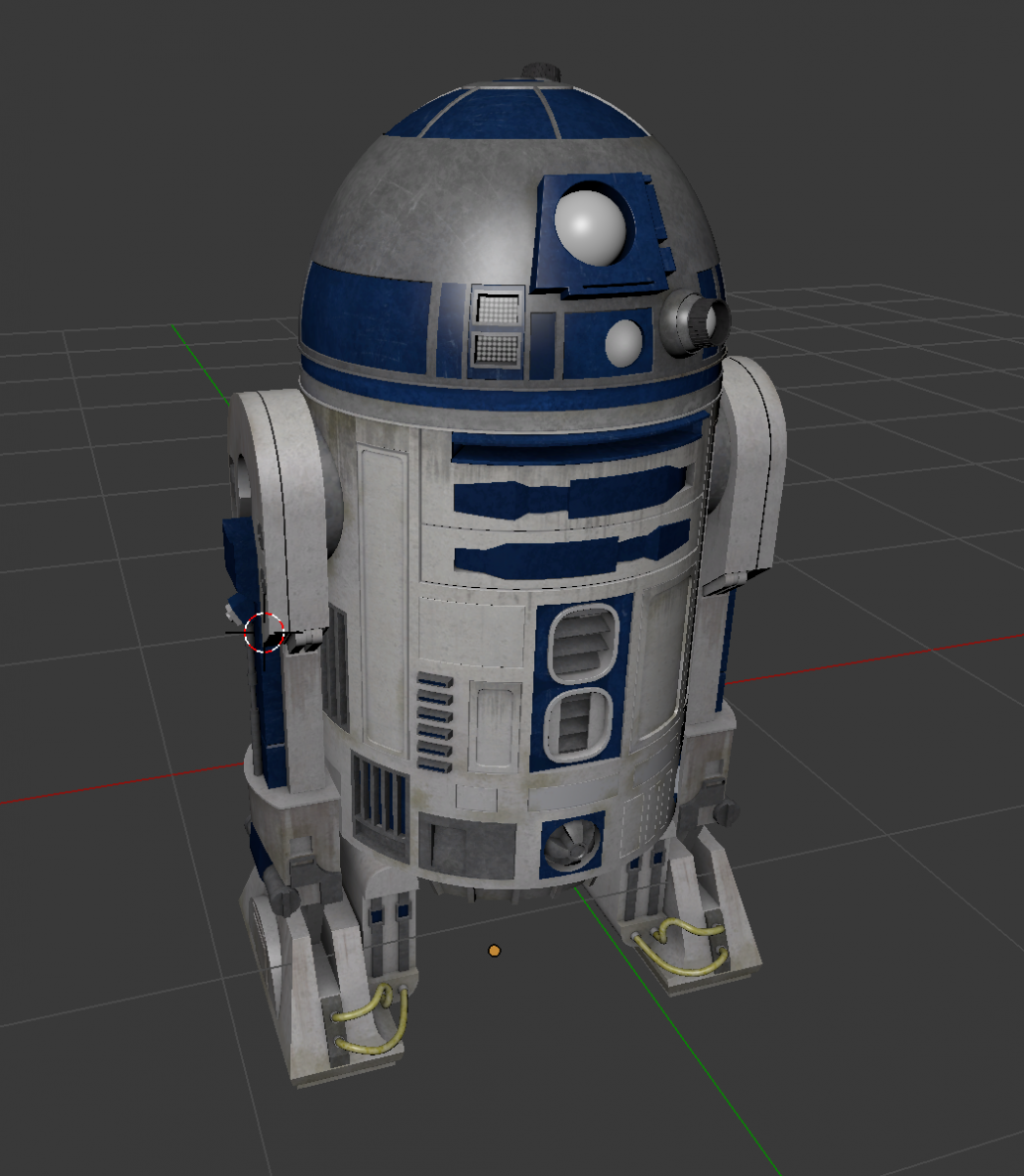 Note that the images are very large 23MB per image, but we'll look later at how to shrink those. If you look into the directory you'll notice a couple of other image files:

And when you apply them, you'll get a model that looks something like this (quick render, without any material optimization): 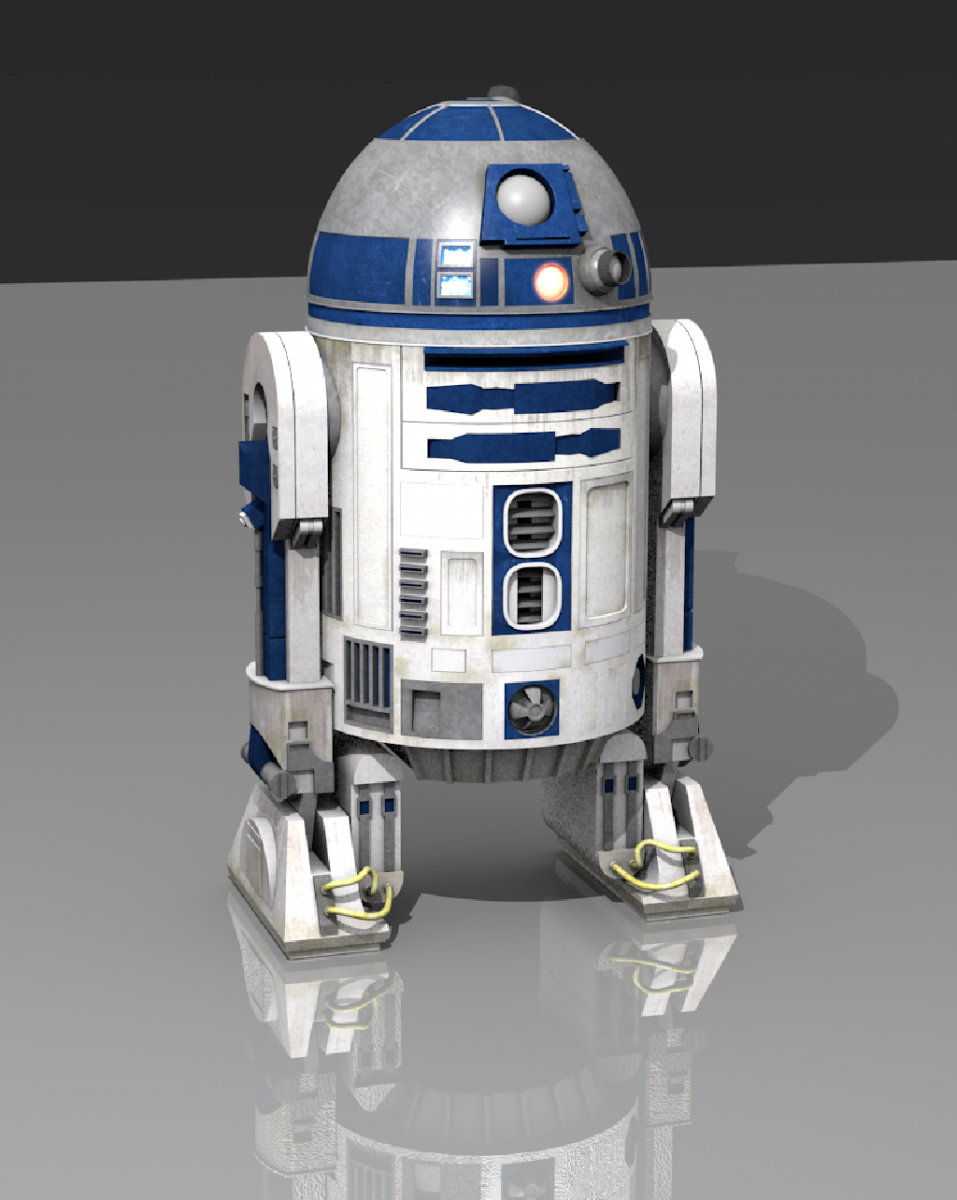 When you apply them all, and render the model, it looks quite nice. But this is +100MB worth of textures, so that might be bit much if we want to use this model and textures from Three.js in our browser. Before we look at the Three.js part,

First we'll use ImageMagick to convert the dds files to PNGs.

As you can see, some of the images shrink a lot, other a whole lot less. The main reason they take up so much space is because the images are rather big:

While this is nice, if want to make realistic looking renders, but it is a bit overkill for when we want to render these models using Three.js. So let's also convert them to some smaller texture sizes (1024x1024):

Now, that looks a lot nicer. Instead of 110MB of textures, we have +/- 6MB of textures. This of course will affect how our model looks. If we rerender the model using the same settings with these textures instead of the HQ ones, we get the following render: 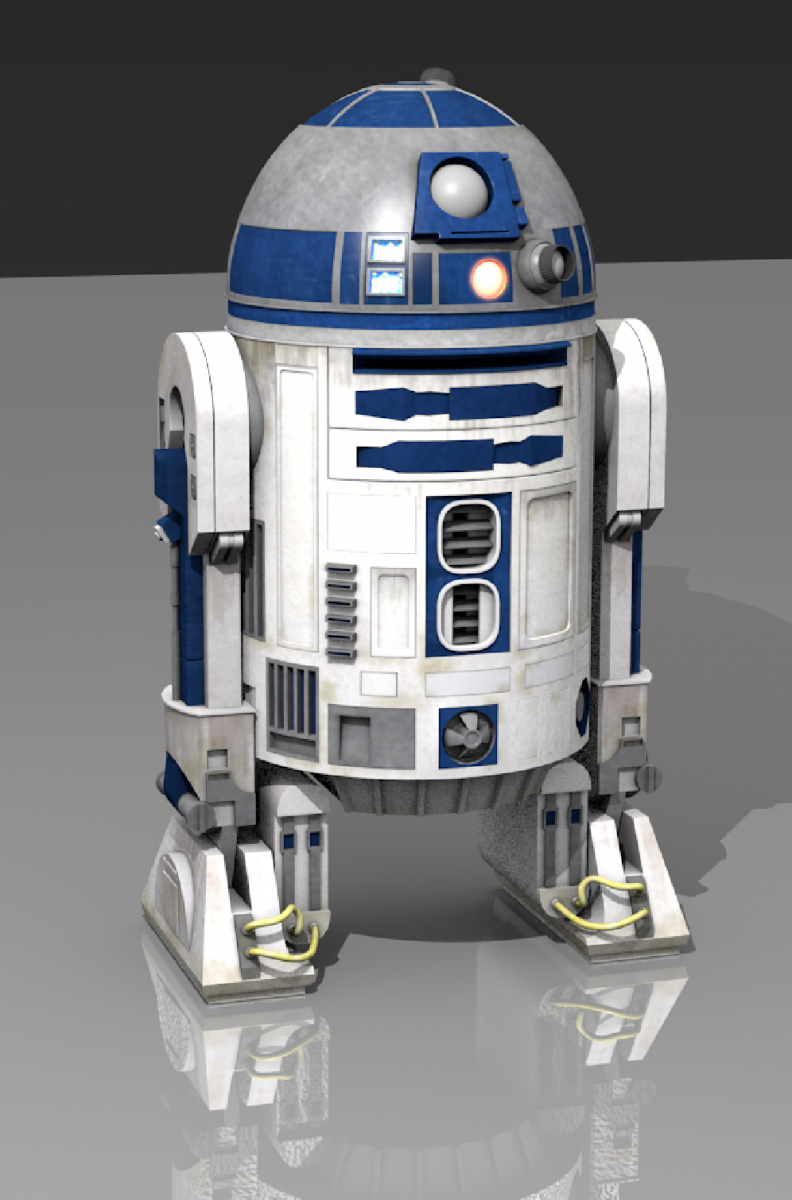 As you can see, still looks very nice. As long as you don't zoom into too much, that is. At this point, we've got a set of smaller textures, so the next

We were able to drastically scale down the size of the textures. We, however, still have the large model we need to load, which comes in at a 4.5MB. While, not being really that large, it is still rather large. To solve this we can reduce the number of vertices, which will also make rendering quicker, or compress the obj file. While testing with the original number of vertices, there didn't seem to be any stuttering or other issues, so let's keep the number of vertices as they are. The easiest way to make the download quicker is by just enabling gzip support on your server:

If you don't want to do that, you might look into some of the javascript based gunzip libraries to decompress a gzipped file yourself. So to limit the size, we'll just assume we have a webserver which returns gzipped data.

Now what do you need to do, to get this running in Three.js. First off you can find a simple running example here: Three.js rendering of R2D2. You can use the mouse controls to orbit around R2D2. 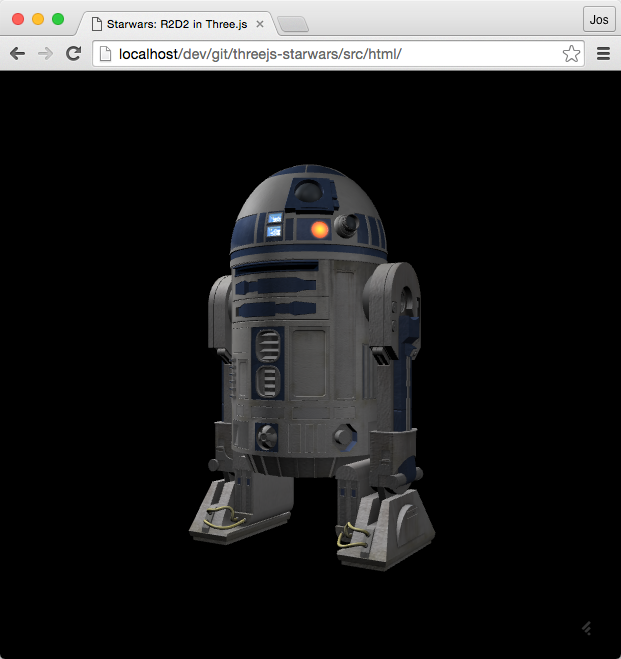 The first thing we need to do is load the model. Three.js already provides an importer for obj files, so we'll just use that one. Let's first look at the code:

If you've already done some Three.js development, this doesn't look that special. We create a number of textures, and after loading the obj model we assign the textures to all the children (the R2D2 model is divided into separate parts). Note that we also assign the head and the Front_Projector childs to separate objects. We do this so we can animate them later on. The interesting part from this code is in creating the textures. When you use the THREE.OBJLoader you get THREE.MeshPongMaterial materials. This material can be configured for a number of textures, which we use like this:

If you've kept track, you might have notices that we didn't mention the provided reflection map (which isn't a real reflection map, as we've seen). Three.js provides an envMap which we could use for reflections, but that serves a bit of a different purpose (cubeMap env example). So what we did was, we combined the provided Diffuse and Reflection map together using Gimp. 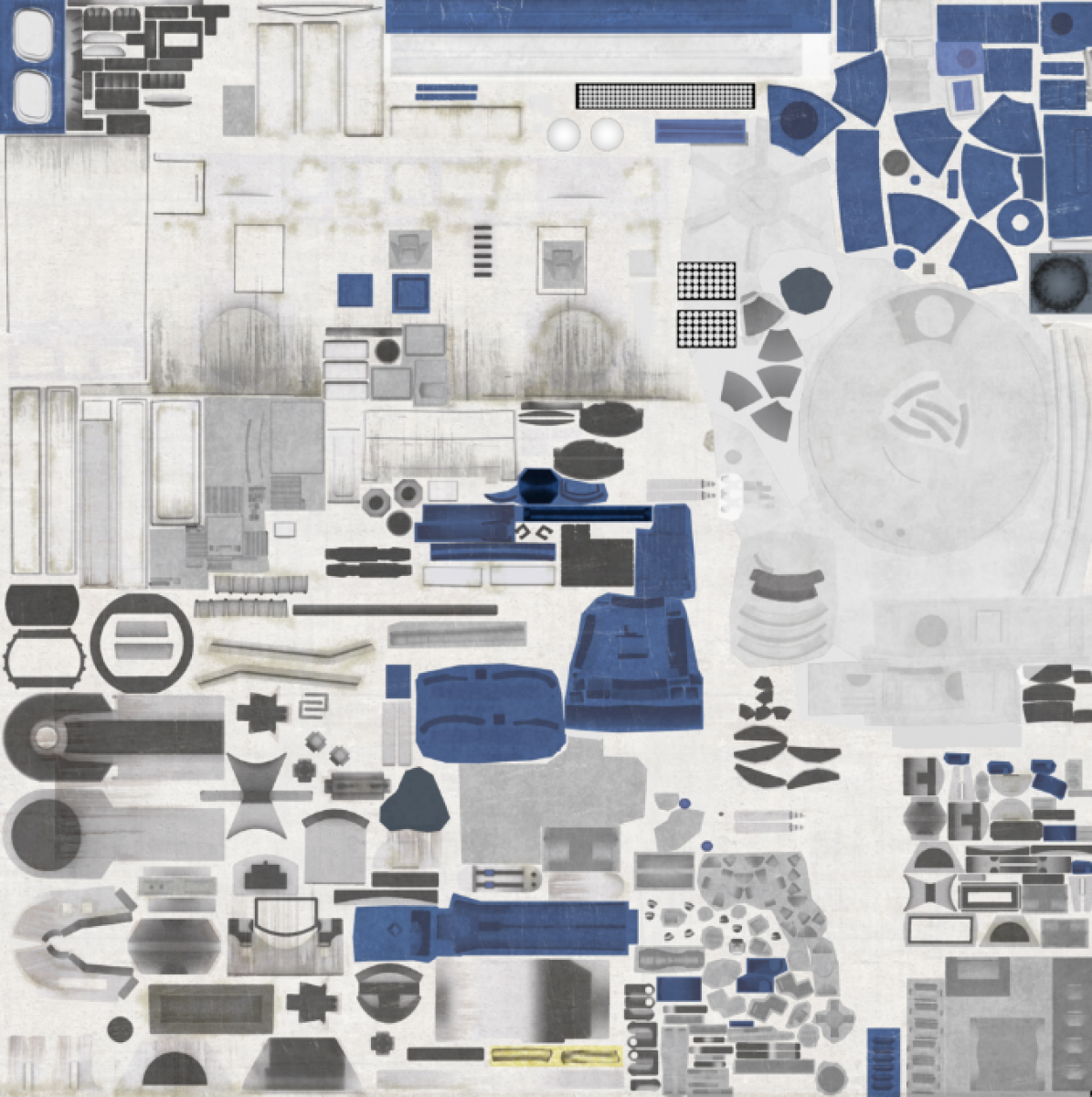 Which was created using the following layer settings:

Now that we've loaded the textures and the model, we can start with the lights. For this simple setup we add three lights. One to the left of the camera, one behind the camera and one to front (basic three light setup: https://en.wikipedia.org/wiki/Three-point_lighting):

As you can see we allow the second spotlight to cast a shadow, which we wrap tightly around the object, to get nice looking shadows.

Rotate the head a bit`

And the last part is a little bit of animation. We just rotate the two parts that make up the head around by updating the values in our render loop:

As you've seen, it isn't that hard to get the models we initially downloaded to render in Three.js. I'm used to first exploring the models and textures using Blender to see what I've got, and look whether the textures are useful, the UV mapping is setup correctly and whether we might need to simply the model.

So basically what we did was:

I'm going to process the other models as well, and post them as demo linked from here.

There are a lot of useful terminal/shell commands which can make your live a lot easier. I do a lot of backend development, and there is a set of commands wh...

This is just a quick article on how to create a simple standalone Apollo client to test Graphql subscriptions. I needed something like this when we ran into...

Getting started with Rust - part 2

In the previous article I started experimenting with Rust and build a very simple extension to git, which helps me remember the most recent branches I’ve bee...