In the previous article I started experimenting with Rust and build a very simple extension to git, which helps me remember the most recent branches I’ve been working on, or did PRs for. For this second article, I wanted to do look at how you can do network programming in Rust.

(If you just want to skip to the code: https://github.com/josdirksen/dns-proxy-rusts)

For this, and the next article, since I’ve only done the basic so far, we’ll look at the steps needed to create a DNS proxy in Rust. This DNS proxy in the end will have the following features:

One of reasons I want something simple like this is that at work we use wildcard certificates to connect specific domains to appications. So ui-dev.smartjava.org, would route to a specific instance, while ui-test.smartjava.org would route to another one. In some cases though, for instance when debugging, or testing k8s or kafka configs, it is useful to route these domains to localhost, or another host completely. We can do this by adding all the domains, including the subdomains to your /etc/hosts file, which solves part of the problem, but that only works when working directly on your local machine. If you start containers in docker, they won’t know about these changes. So with a simple DNS proxy, we can have docker instances use the information from the docker host for routing. And of course I’m just interested to see what kind of DNs queries my machine is making.

For this first article we’ll focus on the first of these points, and try to get the basic application up and running. As a more technical / Rust goal I wanted to mostly learn about:

Another change I made in regards to the previous article, was that I switched editors a couple of times. Before going into the details on the code I’ve written, a quick note on that.

For my day job I do a lot of Kotlin, and you don’t really have much choice of editor. You just use Intellij Idea. Which is a great editor, but can sometimes become slow and unresponsive, since it’s got so many features, checks and other smart things running in the background, analyzing your code. In the previous article, I used the Intellij Rust plugin to write the git extension, but for this DNS example I’ve switched to using Visual Studio Code. 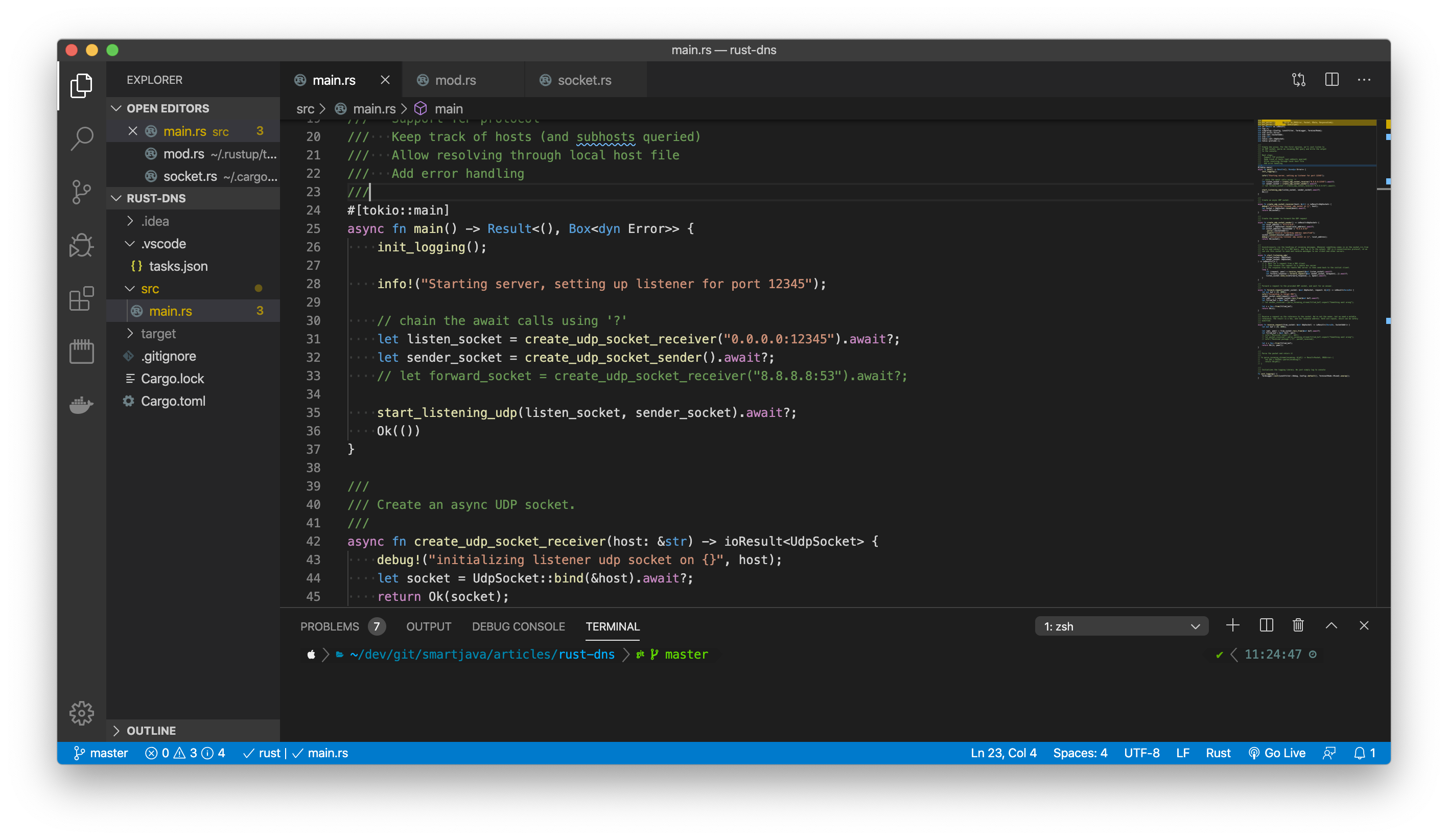 Code has different plugins you can use for editing Rust, and I tried the following two:

I started off with the offical extension, and initially it worked great. I got code completion, could quickly skip through source code, and had nice inline comments. It also provided integration with the Code tasks system to easily run tasks ons cargo. However, when I started adding the async/await stuff, it just stopped working. I still had some code highlighting, and it showed the errors (the squiggly lines), but there was no code completion anymore, and jumping to implementations also pretty much stopped working. Apparently this is a know issue, and is caused by the macros from Tokio, which I used to add async support to my code. At that point I, momentarily, gave up on Rust in Code and switched back to IntelliJ. But, unfortunately, with the Tokio stuff added, IntelliJ was giving the same kind of errors. So back to Visual Studio Code, and then I tried the Rust Analyzer extension. This one was actually working quite ok with the async stuff, so I’ve written the rest of the product with that extension.

( There is also Another rust with RLS extension, on the marketplace, but I didn’t test that one.)

I’ll check back in the near future how the various extensions evolve, but at least I’ve now got a light weight solution to work with in Visual Studio Code, which works quite nice with the tasks in Cargo.

For this first version we’re just going to create a DNS Proxy which works with UDP. You can also run DNS queries over TCP, so we’ll add that in the next article. UDP is a connection-less protocol so we need to take that into account when creating our service. The following image from this slidedeck (Introduction into DNS), provides a nice explanation of what we need to do: 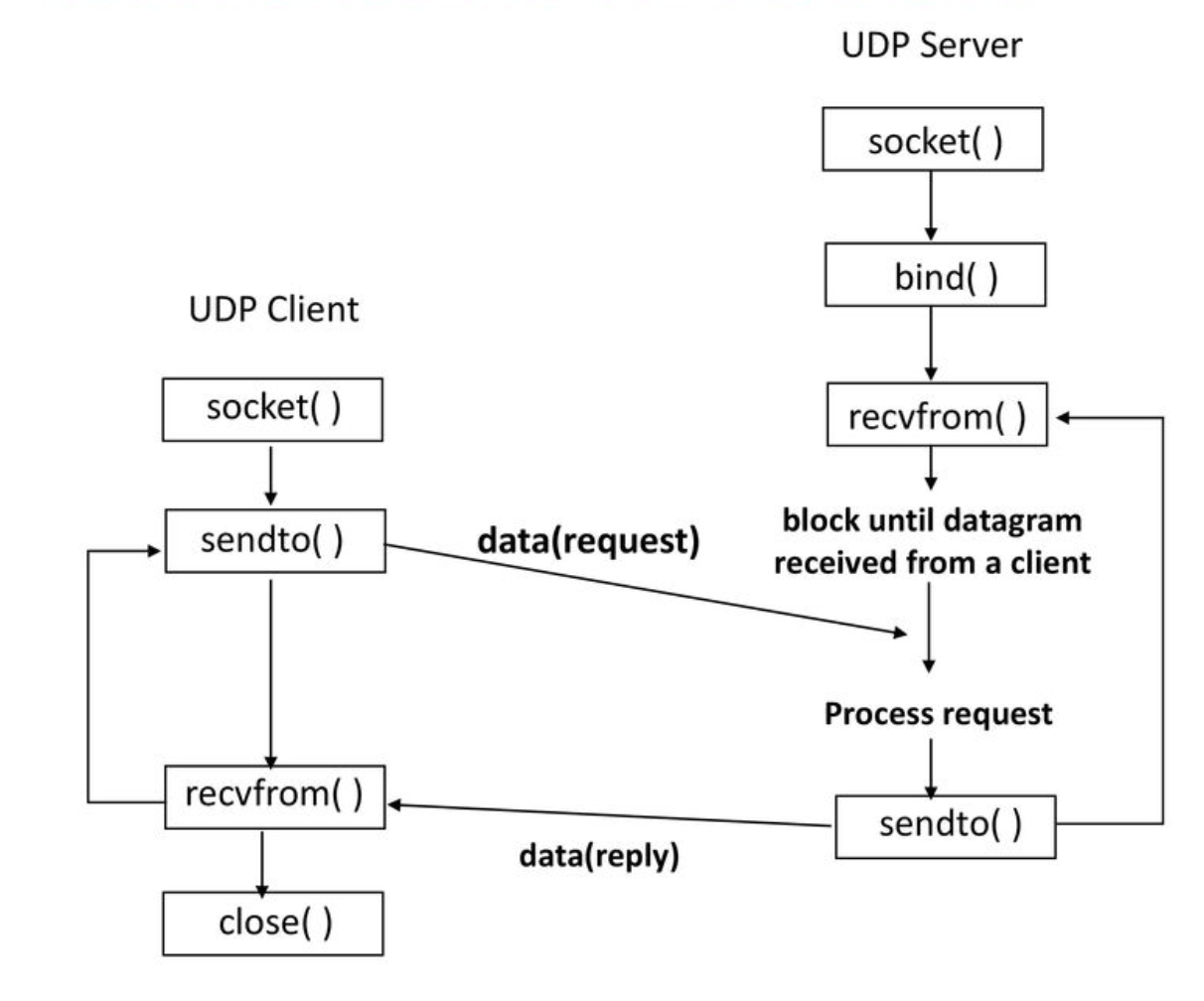 So we need to write the following:

First of, lets look at the libraries used for this proxy

We use the following cargo.toml.

We’ve got the following libraries in here:

Before I’ll show my simple code, a quick sidestep on the whole async/await stuff.

With async/await we get a lot of syntactic sugar on how to work with futures. So we can write asynchronous code, which can be read as sequential code. Rust has a complete async handbook (which I’ve only skimmed through so far) explaining this concept.

Basically what it allows is to write code like this:

I hadn’t seen then question mark thingy ? at the end of a function call beforehand, but it appears to be some syntactic sugar for dealing with Result types. It allows us to just chain together functions that return a Result without having to and_then or pattern match the results. Basically a minimal version of Haskell’s do-notation or Scala’s for-comprehensions.

Now let’s look at the code

The code in itself isn’t that large, so I’ll first show the complete project so far with all its comments, and below that explain some of the stuff I was struggling with, or found interesting.

Let’s start with the main function. In our case this creates a client UDP socket, and a server UDP socket.

I’ll skip the implementations of the two create functions, which internally use the Tokio provided UDP network sockets. We use the Tokio provided ones, since they already work with async and await, so we don’t have to create and implement our own Future implementation on top of setting up the connections. When both of the sockets have been created, we pass them into the start_listening_udp function, which will continuously wait for new datagrams. Tokio provides an enhanced main function, which we can define as async itself, so we don’t have to do any blocking here.

In the function above you can also see how await together with the ? function really allows for easily readable asynchronous code. The next interesting piece of code is the start_listening_udp function (in the future I want something similar for the TCP functionality):

This function is a never-ending loop on top of three async functions. First we wait to receive a request on the socket our server is listening on. Once we get that request (e.g a message from dig), we call the forward_request function. This function will forward the request to a real DNS server, wait for a response, and return with the response. Finally we send the response back to our original client (dig) and wait for new requests to come in. The nice thing about this code, is that it is very easy to reason about. The whole await/async stuff is nicely hidden from view, and we can sequence calls by usinig the question mark. I was impressed that a low-level language like Rust had such advanced constructs.

Let’s look at one of the functions, since the others are pretty much the same:

Here we have the same couple of await? steps. This time to make a call, and wait for a response. Easy right?

So finally when we run this, we get the following when we make a call:

Just like the previous project, it’s been really a fun process of doing this.

So what was easy and what wasn’t?