During the last year I've become a big fan of using Consul for all things related to service discovery. If you're doing microservices you've probably ran into the issue that when the number of services you create increases it becomes more and more difficult to manage the communication between all these services. Consul provides a perfect fit for this problem. It provides an easy to use, open standards based (opinionated) approach to service discovery (and besides that provides a large set of other functions). I recently gave a presentation on how to do Service discovery in a microservices architecture using Consul, and got a couple of requests to explain a bit more about it. So in this article, and a couple of follow ups, I'll explain a bit more about how you can use Consul. I won't just focus on purely the service discovery part provided by Consul, but also show you a couple of other features provided by either Consul or one of the tools surrounding it.

For the other articles in this series you can look here:

Note that all the samples, docker files, etc. can be found in the following repo: https://github.com/josdirksen/next-build-consul. So instead of "copy & pasting" from this article just clone the repository.

In this first article we'll create a simple docker based architecture with a number of services that will communicate with one another using simple HTTP calls, and that will discover each other using Consul. Our initial target architecture looks a bit like this: 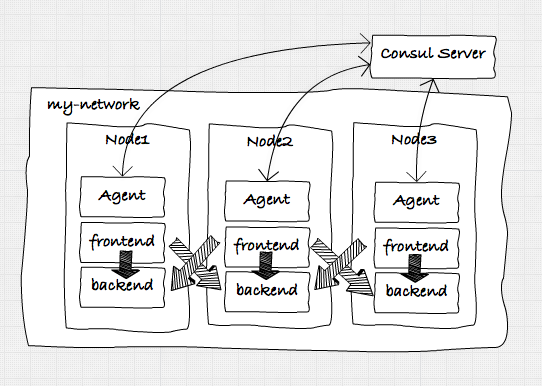 To accomplish all this we first need to take the following steps to set up an environment we can run the services in:

Note: I'm using docker-machine on my Mac to do all this. If you run Windows or Linux the commands might vary slightly. Let's hope that Docker for Mac (and Windows) quickly comes out of beta (https://blog.docker.com/2016/03/docker-for-mac-windows-beta), so we don't need this anymore...

So the first thing we'll do is create some docker-machines. First we'll create the docker-machine that'll hold our consul server. The reason we run this one first, is so that we can point the other docker-machines to consul running inside this container and use it for managing docker-swarm and the overlay network we want to use.

Before we start the Consul server, lets quickly look at the architecture behind Consul. 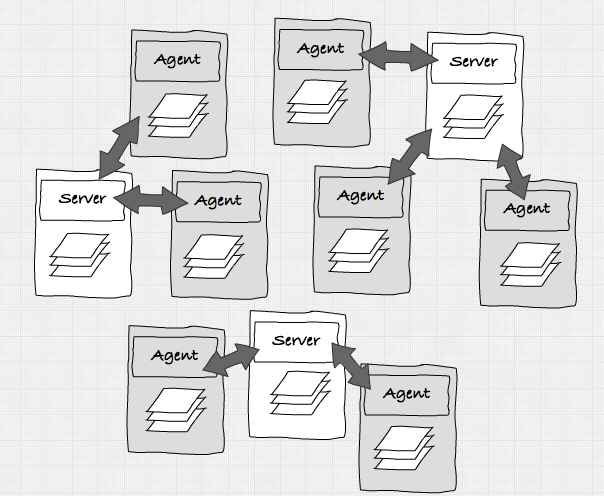 In this image you can see the two modes Consul can run in. It can run in Server mode or Agent mode. All the Servers talk to each other and decide who is the leader. An agent just talks to one of the servers and normally runs on the node that is also running the services. Note that the state between all the Servers and Agents within a cluster is shared. So when a service registers itself with one of the agents, that information is available to all the Servers and the Agents that are connected to one another.

For this set of articles we won't setup a cluster of Servers, but just use one. Now that we've got our docker-machine running, we can start the consul server. Before we start let me first show you a simple script that make switching between different docker-machines easier and the alias we use to avoid typing "docker-machine".

So with these aliases in place, first we do a "dm-env nb-consul" to select the correct docker-machine.

Next we get the ip address of this server and then we can start our Consul server like this.

At this point we have our docker consul server running. Now lets create the other three servers on which we'll run our services.

As you can see in the following commands, we're also creating a docker swarm cluster at the same time, and the "nb1" node is the swarm master.

At this point we've got four docker-machines up and running. One is running a Consul master, and the other ones aren't doing much yet.

Before we continue with configuring the slaves, there is one more utility script that might come in handy:

This script adds the ip addresses of the docker-machines to your local "hosts" file. This means that we can simply access the docker hosts by just going to "http://nb-consul.local:8500" for instance.

In our scenario we want all our services to be able to communicate with one another. We have multiple docker hosts so we need to find an easy way to have services running in node "nb1" to be able to communicate with "nb2". The easiest way to accomplish this is to create a single network that is used by all the services running in the docker containers. To do this we create a simple "overlay" network like this:

And since we created this on our swarm master, this network will be available in all the members of our swarm. When we create our services later on, we'll connect those to this network, so that they all share the same subnet.

To start the consul agents, we're going to use docker-compose. The docker-compose file is very straightforward, and is just a simple way to avoid typing in all the launch commands (especially when you're doing live demos)

Nothing to special in this file. The only thing you might notice it that we use explicit IP addresses in the commands to start the Consul agents. We could, easily, just use an environment variable for this, which is set through a simple bash script. But for this article we just specify the IP addresses of the relevant docker-machines. Make sure your "DOCKER_HOST" points to the docker swarm master and start the agents like this:

At this point we have a Consul server running in docker-machine "nb-consul" and we've got three agents running on our nodes. To validate our setup, let's open up the Consul server's interface: http://nb-consul.local:8500 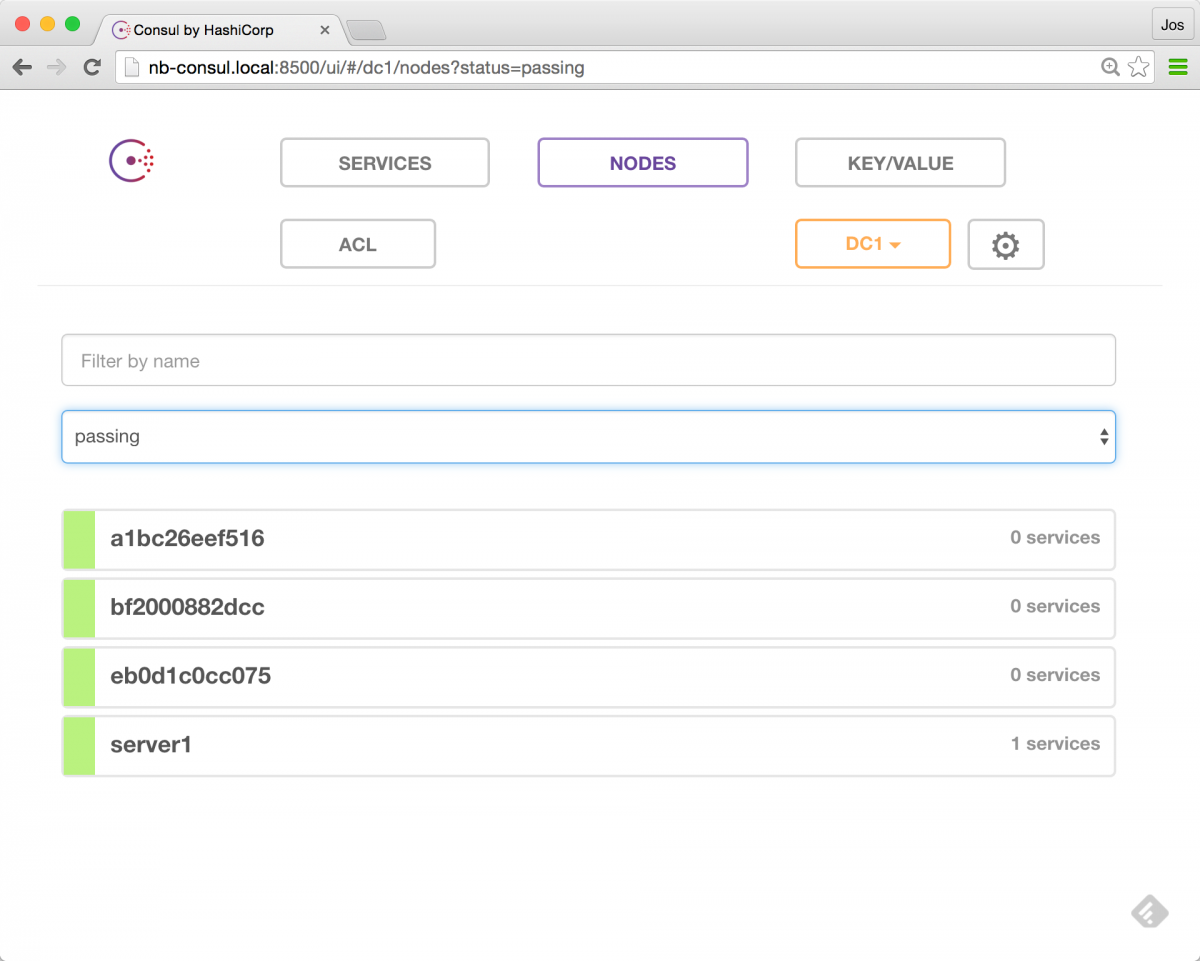 And, as you can see, we've got 1 server running (our Consul Server), and the three agents. So at this point we can start adding our services, to get to this architecture:

The services in this case are just simple golang applications. I created a simple application that can run in frontend or in backend mode. In frontend mode it provides a minimal UI with a button to call a backend service, and in backend mode it provides a simple API that returns some information to the calling party, and it provides a simple UI showing some statistics. For convenience I've pushed this image to the docker hub (https://hub.docker.com/r/josdirksen/demo-service/) so you can easily use it without having to build from the source github repository.

As you can see in the previous architecture overview we want to start a frontend and a backend service on each of the nodes. We could do this manually, but since we've got docker-swarm we can easily do this through a single docker-compose file. If you want to see what this file looks like you can check the sources here (https://github.com/josdirksen/next-build-consul).
Lets first launch the services, and then we'll look at how they register themselves with Consul:

As you can see in the last output of "docker ps" we have three frontends, three backends, and three consul agents running. This is pretty much the architecute we're aiming for. We can also see this when we open up Consul: 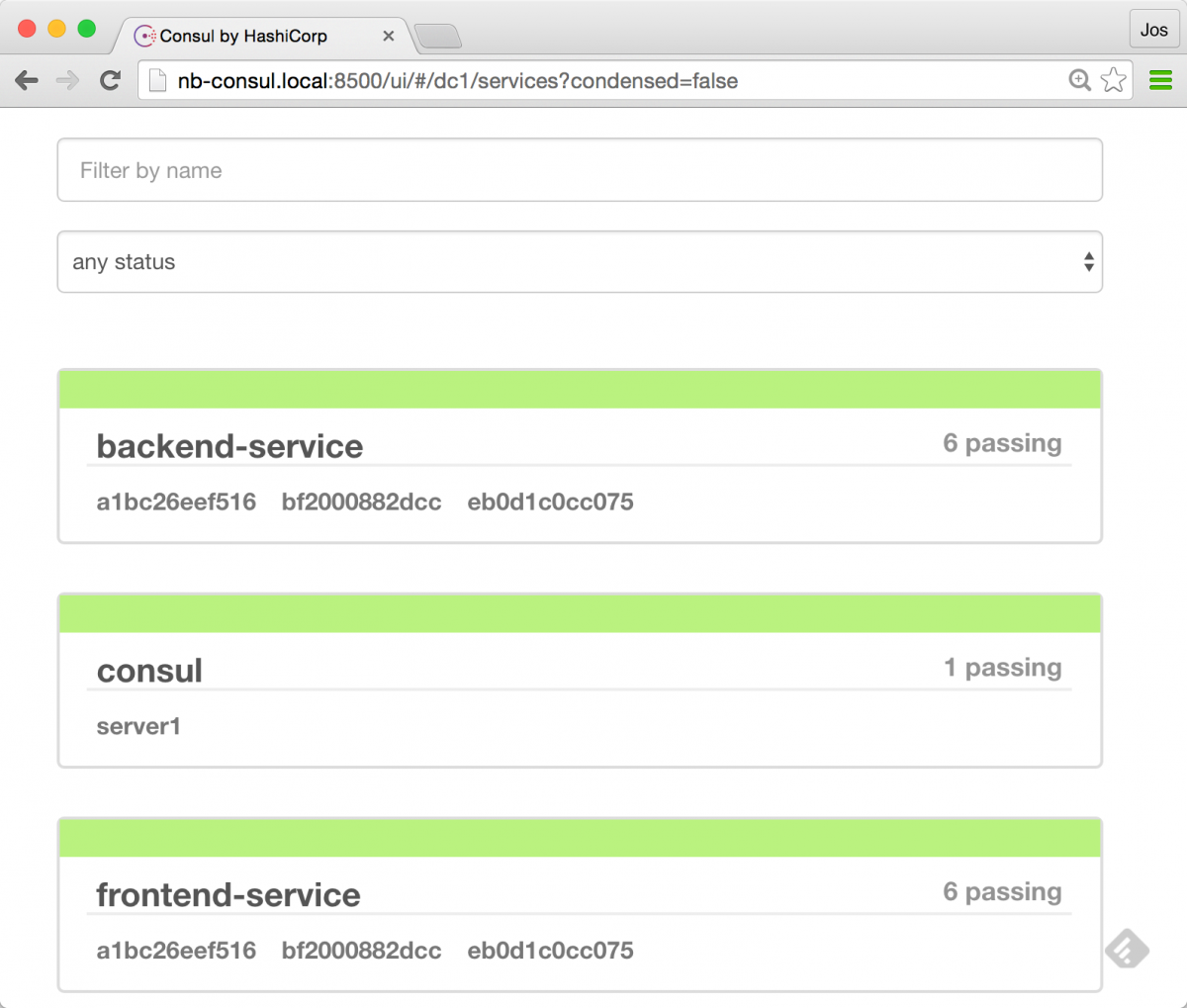 As you can see we've got three frontend services and three backend services registered in Consul. If we open one of the backends we'll see some general information: 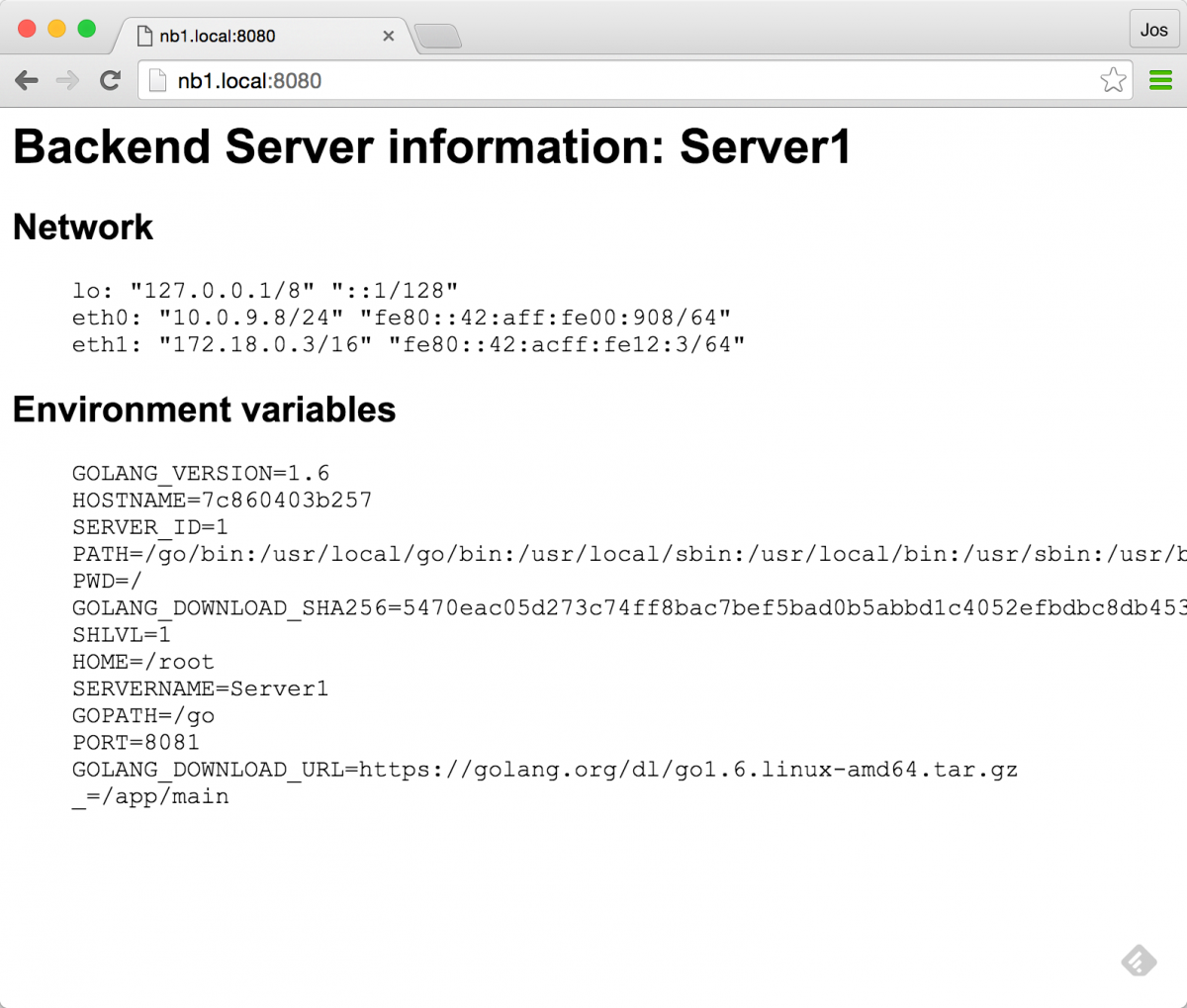 And we can use the frontend UI, to call one of our backends: 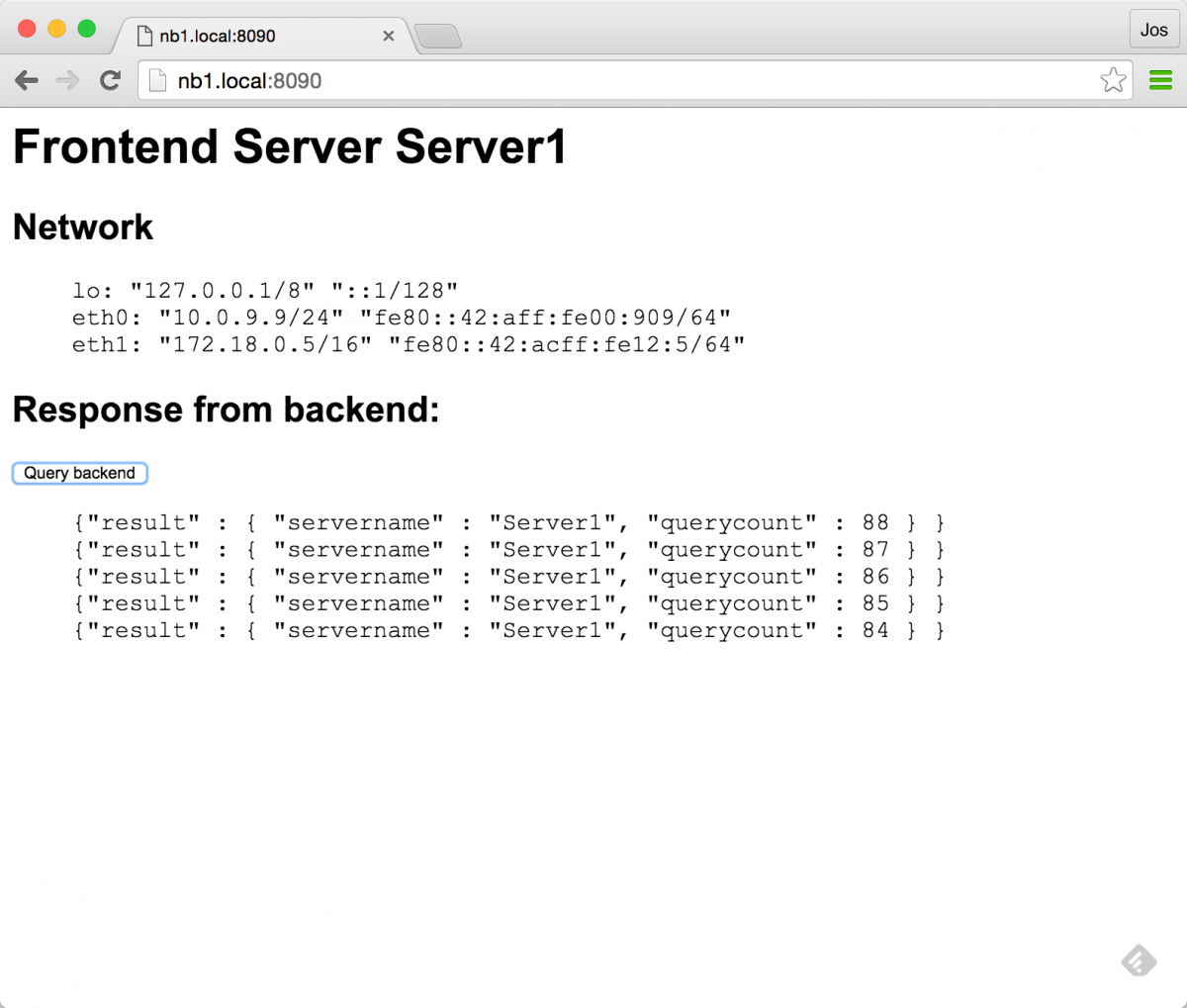 There are however a couple of questions we need to answer:

In the next sections we'll look a bit closer at these questions.

First off, service registration. To register a service with Consul, we have to make a very simple REST call to our local consul-agent, which looks something like this:

As you can see, we specify the name, address and port where the service can be found, and we add an additional health check. When the healtcheck returns something in the 200 range the service is marked as healthy and can be discoverd by other services. So how do we do this for our services. If you look at the sources for this example you can find the "script/entrypoint.sh" file, which looks like this:

What this script does, it that it creates the JSON to be sent to the consul-agent and before starting the main application it uses "curl" to send it. So when a service is started, it automatically registers itself to the local consul agent (note that you can also do this more automatically for instance using Consul Registrator. This works since we can just reference the local agent by its name, since it is in the same contaner. If you look closely you might see that we use a couple of environment variables here. These are passed in through the docker-compose file we use:

The interesting part here are the DNS entries. As you might remember the 192.168.99.106 is the address of our consul server. This means that we do DNS lookups against Consul (we could also have pointed to a consul agent).

With this setup we can just reference a service by name, and use DNS to resolve it. The following shows how this works.

Cool right? We can discover service, by just using DNS. That also means that integrating this in our existing applications is really easy, since we can just rely on basic DNS resolving. For example, in the frontend service we call the backend using this code:

This calls one of the backend services using DNS. We now also have some simple failover, since the DNS timetolive of Consul is set to 0. Applications might still do some caching, but it means that we already have some basic failover:

Which of course also works for our frontend/golang application: 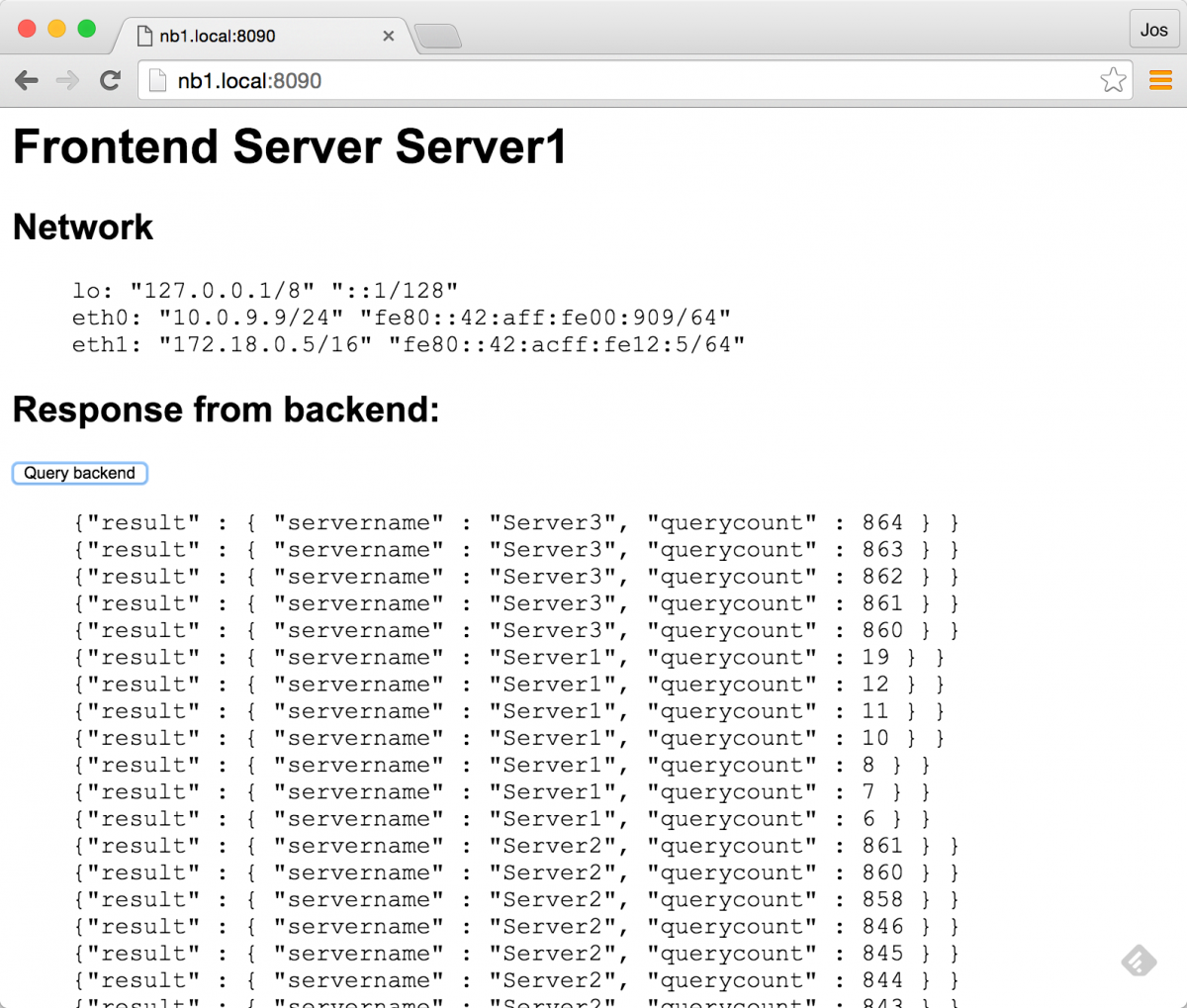 That pretty much wraps it up for this first article. So in summary what have we done:

Keep tuned for the follow up article somewhere in the coming weeks.